I woke up to the church bells that beautiful summer morning. I got prepared and dashed out for my 15 minute walk to campus. Everything felt different that morning. The morning light shone brighter. The air was crisp with the compelling tang of the ocean a few blocks away. The birds chirped and sang in the glow of the daylight. I hummed a sweet tune as I waltzed my way to campus that morning to begin my new job. Finally, I could see a ray of sunshine after three tumultuous years as a graduate student. Finally, I felt like my worst days were behind me, and better days were within reach. My joy knew no bounds.

It was about three months since graduation. My two jobs in the Information Technology Department and Institutional Research Office were going great. I had a few months left on my contract with the Institutional Research Office, but I had a strong feeling that something big was ahead. I prayed daily for the Lord to continue to fulfil his promise of keeping me in constant celebration. August 2010, I finally moved out of the bedroom I was renting downtown into my very own apartment. I started out with no furniture, but I had never been happier to sleep on the carpet lol. The best part of this apartment was the kitchen. I finally had a kitchen!! I no longer had to cook with crock pots and table-top stoves like I did in my little room during grad school. My friend at work who was like a mother to me brought me every single item I needed for my kitchen – pots, pans, kettle, cooking spoons, chopping board, plates, cutleries, I mean every single thing one would need in a kitchen! That was a huge blessing! Gradually, I was able to furnish my new apartment. See some pictures below.

In 2009, shortly before my former boss left the college, a Data Analyst position had been created at the Institutional Research Office and the position was filled. At the time, I was still a student, so I couldn’t apply for the full-time position. In August 2010, the guy who was hired decided to resign and seek other opportunities elsewhere as he felt the position was not exactly what he was trained for in graduate school. At the time, I didn’t have an office and my desk was in a corner in the hallway of our office suite, so I was asked to move into his office temporarily until his replacement was hired. I remember that day vividly. I moved most of my stuff into the office and once everything was set-up and arranged, I closed the door slightly, then I stood up and decreed, “Father, you said in your word that wherever the soles of my feet tread, it belongs to me. So Lord, I decree that if this job is for me, I will remain in this office and this job will be mine in Jesus’ name, Amen.” Soon the job ad was posted. I started hinting to my Acting Director that I was interested in applying for the Data Analyst job. I will never forget what she said to me one day. “Sana, you are very smart and you learn really fast. I should warn you though that if you apply for this job, we will definitely receive applications from more qualified candidates with more experience and we intend to hire the most experienced person.” Upon hearing this, I decided not to apply… yet. I prayed a simple prayer, “God, if this job is for me, no one will qualify for this job.”

I was added to the interview panel for the Data Analyst position after I indicated that I would not be applying for the job. I laughed within me when I started reviewing the applications. The candidates for the job were not even remotely qualified for the job. Bartenders applied, people with History, Fine Arts degrees with absolutely no IT background applied. The other two people on the panel felt it was a joke. “How come there is not one single person qualified for this job among the candidates?” One of them asked. I shared their sentiments but within me, I perfectly understood that the hand of God was at work. None of the candidates were invited for an interview and the job ad was posted again, same thing. At this point, people were stopping me around campus and asking me why I didn’t apply and I would make up a little excuse. The job ad was posted the third time and the application deadline was a bit further than usual. This time, there were three people who were just a bit qualified but did not have the experience that was required. We decided to interview the three candidates. After all the interviews, it was decided that one of them would be hired. Just before my boss made the call to the successful candidate, she decided to look him up online and what she saw about the guy was very discouraging, and so she decided not to hire the guy. We decided to post the job ad again the fourth time. But this time, my boss was really discouraged regarding the pool of candidates we were getting. One day, she called me to her office and said to me, “Sana, we cannot find a more qualified candidate than you. We really want you to apply.” I applied and just before my work contract with Institutional Research was to expire, I was offered the permanent job as a Data and Reporting Analyst to the glory of God. I was finally able to use the SAS programming training I got at the office as a student worker. The office I occupied became mine permanently, my salary was doubled, and my life changed for the better. Months later, I bought a brand new Toyota Corolla. See pics below. 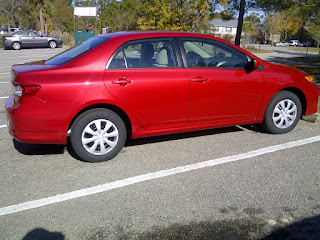 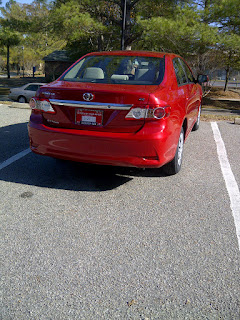 My mother taught me an important lesson right from when I was a little girl. I watched life throw punches at my mother, yet she never allowed life to break her. She never allowed her situation to reflect on her countenance. She spent time constantly in the word and on her knees. That’s where she drew her strength from. My mum taught me that the moment you allow situations and circumstances shake you, or stop you, the enemy is winning. She taught me to be strong, tenacious, and to keep moving forward in the midst of adversity. My mother taught me to never give up and to fight until I win. There were moments I could have given up in Charleston, but I knew that God took me to Charleston and He had great plans for me there, so I decided  to constantly decree the word of God over my life and take possession of all the Lord had in store for me in Charleston. God has been faithful to me. He brought me praise and fame in the land where I was put to shame. He gave me double for my trouble. I encourage you today not to quit. Decree the word of God over your life, get on your knees and pray daily and take possession of everything God has promised you. Don’t quit until you win!
I remained in my position as a Data Analyst for almost 3 years until I moved to Canada to join my husband. Wait until you hear my Canada story, you will attest that God was just getting started with me in Charleston!
To be continued…