Before leaving Falmouth we treat ourselves to a breakfast at a restaurant that looks out over the Bay. 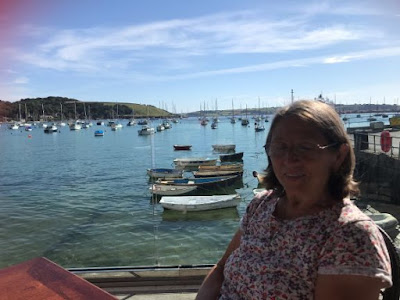 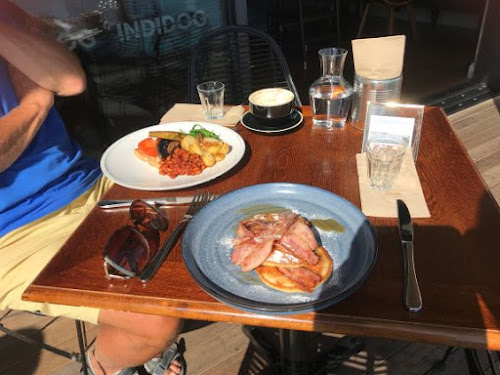 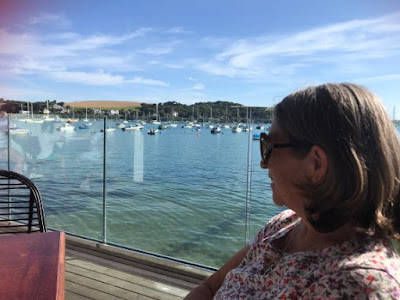 And was it worth it, dear readers?
A table outside on the quay, morning sun warming my back, pancakes with maple syrup ( for me) yummm, gluten free fry up for Peter, the best cappuccinos I’ve had for a long time. It was worth every penny! The food was amazing , the service exceptional and the waiter even asked if we’d like a jug of tap water (not to have to ask is a rare thing, or maybe it’s just the establishments we are used to).
We left on cloud nine and after buying hats in the town, we got in the camper and headed towards Megavissey. 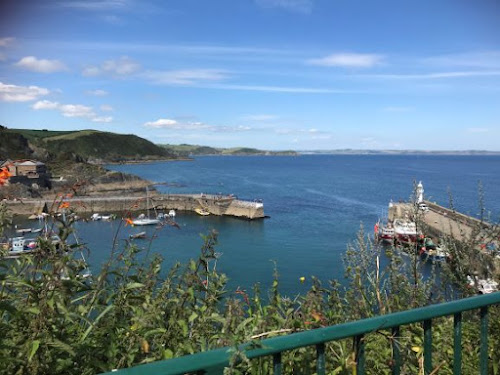 Megavissey holds happy memories for me, ever since childhood when my parents took us on a number of  holidays there, in the days before we started going abroad to Spain and France. Dad always liked to fish off the harbour and I loved to join him, learning how to cast a line and how to gut the mackerel that we would catch. Cutting down the belly of the fish, in no way put me off enjoying it fried for supper in the evenings. My sister’s, being younger, didn’t seem keen.

An attractive harbour-side village on the more sheltered South Coast of Cornwall, it’s a hive of industry with the  harbour itself, full of dozens of  small fishing boats, the owners of which make their living from the sea. In the narrow streets of the village you’ll find many restaurants, pubs and cafes, as well as galleries, gift shops and craft workshops. Some of the fish restaurants and fish shops are in old buildings which used to be the haunts of Cornish  smugglers.

Back in the 1770’s smuggling was popular around the Cornish Coast and Megavissey itself had numerous secret passages, trap doors and creative ways of getting through the village unseen, to support it’s underground industry. French cognac, dutch gin, tea, tobacco, silks and lace could all be picked up and brought back to be sold at high prices. A single trip could make a whopping £170,000 in profit in today’s money. No wonder it was rife at that time.

We arrive on the morning of the 23rd July and because I’m concerned about finding parking and negotiating the narrow streets, we stop in a layby a few miles  away to rest, collect our thoughts and have a coffee.

However, it turned out we didn’t need to worry. There was a huge  carpark right on the edge of the village, with a sign that showed it welcomed camper vans and that it might be possible to camp for the night.

We were pleased to learn that for £8 we could park for the night and sleep in the camper. No facilities, but safe and legal, nevertheless. All the other carparks we’d seen in Cornwall so far had overnight parking alright but none allowed sleeping in  your vehicle. We happily handed over the £ 8 and felt comfortable knowing we didn’t have to leave till the next morning at ten. That would do us.We couldn’t believe our luck, especially as the campsites were all full and we didn’t want to have to do wild camping. We’d now have time to have a good look round without any worries about the night time.

We put the top up. I stand up, making the most of the extra space, and put together a quick lunch before we go for a walk to find the harbour. The centre of the village is only 200 metres  from us – easy. 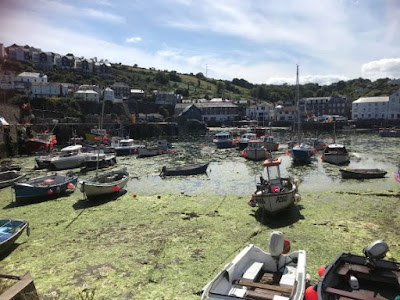 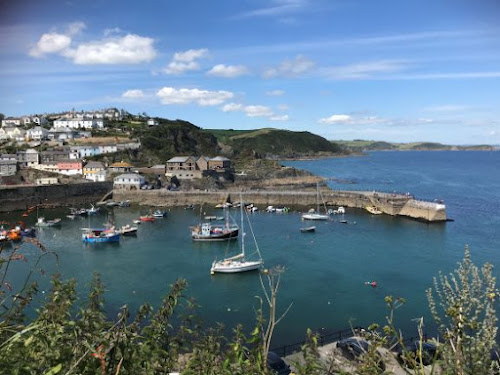 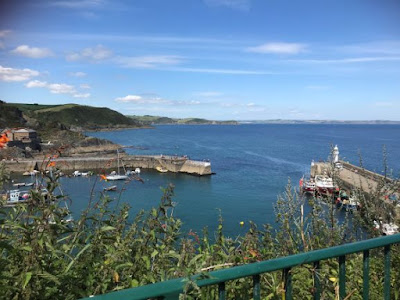 It took me a while me a while, but as we came to the harbour wall warm recollections of dad fishing there came flooding back. I stopped still and wiped hot tears from my eyes. Peter’s arm found it’s way softly across my shoulder. I leant into him and for a few moments lived in another time. I dried my eyes again and we continued to walk to the end of the wall where we could see people fishing. I won’t call them fishermen, although some might of been. But the majority were holiday makers trying their luck. I saw a little girl of about nine helping her dad. She brought him a hammer for the mackerel he’d just caught. What did me and dad do, I tried to remember. We didn’t bash them over the head, anyway, I thought. No, dad did something quite gentle. I couldn’t say what.

I could tell that Peter was itching to get his rod out and have a go himself, so after walking around for a bit with the sun shining and the water glistening and everywhere a view better than the last, we hurry back to the camper to get it.We decide we’ll spend an hour fishing or finish after he catches two fish, then go back for dinner. Only two fish because he won’t take more than we’ll eat.
He casts off well. Not near the others on the harbour wall, but off by himself a bit nearer some rocks where we’ve seen some small fry swimming.
The wind blows my new hat. I hold it across my face to keep the sun away from those wretched, bloody lips that are sore now, after being burned.
Unfortunately, just as he’s getting into his stride, whoops , the line breaks, taking with it the little fish look-alike that is his bait. He didn’t bring any replacements. I see the disappointment in his face, but  he decides that’s enough for today.
With the extra time I’m now left with I use it to make a chicken curry, using just a little chicken and then bulking it out with potatoes, onions, carrots and courgettes. Delicious!
In the evening we walk all around the village, in and out of the residential area on the hill, taking in all the Mevagisseyness that we can. Some of the little streets were so narrow that if the person from one house opened their front door and put out their hand and the person from the one opposite did the same, they would touch hands easily. No cars up these streets. I tried to imagine how someone might carry their belongings up when they were moving in. I wouldn’t like to do it.
The rain cuts our excursion short and we end uo in bed early with a bottle of wine, listening to radio Cornwall. A fabulous day.