Cornwall and all that.

HomeWorldHealthCornwall and all that.
/
/ grams ramblings

It seems like a life time ago since we came back from our trip to Cornwall.

Since then we’ve slept in the camper for eight nights, but only outside our children’s houses when we’ve been to visit. We find it easier than disturbing them and we’re in our own “bedroom”. We love it.

But just to finish telling you a bit about the last days of the “holiday”.

At first I was disappointed to not be going to Spain as we had intending. Covid scuppered our plans. But so much was gained from our staycation and from being with the family, that it was all worth it. It put into perspective how important it is to be with the grandchildren and get to know them better. In fact hubby and I have decided to make more of an effort  as time is running out for us . Yes, OK , a bit morbid, but true nonetheless and we are making memories for them for when we are no longer around.

One day, after spending the morning with grandkids, we went off by ourselves, Peter carrying a rucksack with his fishing rod in, just in case. Our walk took us along the coast from one cove to another beach about two miles away. Hubby looked  longingly down at the rocks, which, it seemed, were impossible to get to. He did see a couple of people fishing and we wondered how they got down there. And it was indeed  a long way down. I thought maybe they’d walked from the beach, but that looked highly unlikely.

On the way back, hubster, determined,  eventually found a gap in the hedge where there was possibly a path down. We fought our way through brambles, nettles and overgrowth, getting scratched into the bargain. But then the path became less difficult, except for being steep and craggy and we were soon on the rocks facing the ocean. These rocks wee also hard to navigate as they were sharp and spiky – not sure how to describe then really.

Peter set himself up and after a few minutes it was obvious the sea was coming. Within half an hour he had to move twice as tide caught up with him. Wanting to get to a safer spot he moved to a corner overlooking the small cove. I settled back to soak in the afternoon sun. And although not comfortable I thought I could relax for the next hour while he fished to his hearts content. You know, get it out of his system.

“Mazzy!” It couldn’t have been more than five minutes later. I turned hastily towards him, wondering why he’d shouted at me? 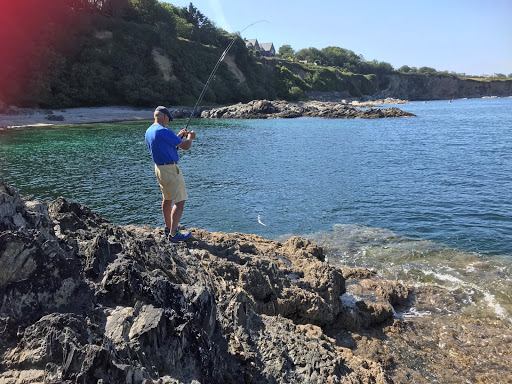 “Oh my goodness, I think you’ve got one. Flippin ‘eck.” i watched as the rod bent and dear hubby teased in his catch. “Wow, you’ve got a fish. Wow!” I tried to stumble towards him.

“Bring the bag,” he commanded. I went back for the plastic bag, which was at the bottom of the rucksack.  He hadn’t expected to be successful so was quite unprepared. He landed the mackerel. It wriggled about on the rocks. It slithered through his fingers as he tried to get a hold of it. When he did he bashed it’s head over and over on the ground in order to kill it quickly. While Peter got ready to cast again, I imagined having the fish for tea. It’s immensely satisfying eating food that you’ve caught yourself and not paid for. I don’ understand why people fish when they can’t take their catch home with them. As I’m pondering such things hubby shouts me again. What? Another? That’s too good to be true, isn’t it. But no, he has got the second one. He goes on to catch four fish within the space of half an hour. It helped that we could see the mackerel were feeding and he just had to throw out the line in the right direction. He stopped after number four because that’s all we could eat, but he could probably have landed a fair few more. 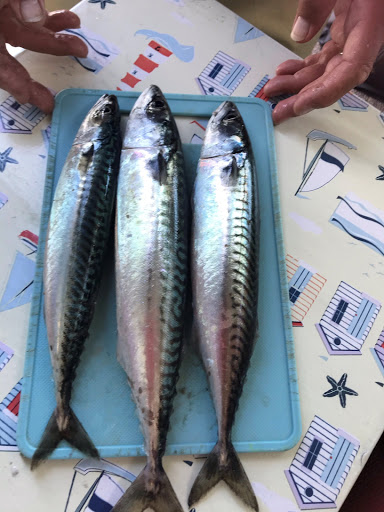