Camping on Dartmoor
It never occurred to me that wanting to visit Dartmoor would bring me face to face with the famous prison of the same name. I really never gave it a thought.
I mean, after all, the moors are vast, covering  an area of some 368 sq miles.
And my main aim was to walk them – well a very small part of them.
But looking at the map Princetown seemed to be in the heart of the moorland, central enough to have a good explore.
No, I didn’t know it was the place where the prison was. That is until we drove by the huge walls behind which another world existed.
It’s history goes back to the early 1800’s.
From 1803 to 1815 Britain was at war with Napoleonic France and many prisoners were taken. Originally they were accommodated in Plymouth on redundant warships.
However, conditions were so bad – poor sanitary arrangements, little exercise, lack of fresh air,  awful diet – that many died.
It was decided to make it land based. Princetown, being in the middle of the moors, was deemed a suitable location and that’s how Dartmoor Prison came to be built. 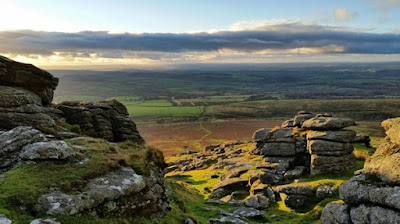 The foundation stone was laid on 20th March 1806 and building work began. The first prisons were constructed from stones obtained by breaking up the boulders lying around the site and supplemented by dressed stone from nearby Herne Hole quarry.
The planned completion of 18 months took twice as long due to labour disputes and the notorious Dartmoor weather. 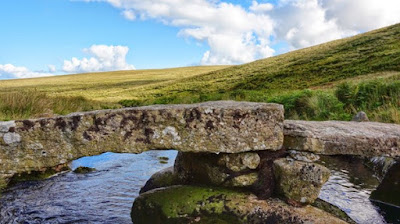 On 22nd May 1809 the first prisoners arrived and the prison, full by the end of the year, soon became overcrowded.
The situation worsened when American prisoners came in April 1813, with outbreaks of diseases killing 11,000 Frenchmen and 271 Americans.
With the end of the wars the prisoners were repatriated, the last leaving in 1816, after which the prison closed, not opening again until 1850 as a penal  establishment for criminals. 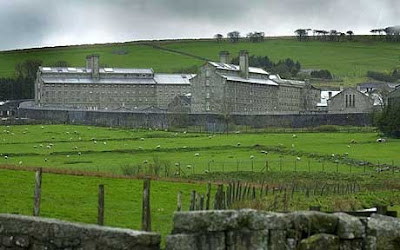 The first convicts were mainly invalids, imbeciles, one armed and one legged men and others with chest complaints who it was thought would benefit from the fresh Dartmoor air.
Cast-iron cells arranged back to back were constructed by artisan convicts under the supervision of contractors.
These were superseded by stone cells before finally the older prisons were demolished and replaced by the buildings you see today, also built by convicts under artisan warders supervision. They were occupied by the worst criminals in the land.
The Military Service Act of 1916 introduced compulsory Conscription.
‘Conscientious Objectors’ or ‘Conchies’ as they were called could apply before Tribunals for exemption on moral or religious grounds and either accepted non-combatant duties or agreed to serve at a Government Labour Camp.
In 1917 Dartmoor prison was designated a Labour Camp and around a thousand such men replaced the convicts, occupied their cells and performed the same work as they had done.
All locks were removed, they had freedom of movement locally and the Warders acted as supervisors only.
They and their families were generally despised and suffered much hardship.

On Sunday 24th January 1932  around fifty men broke ranks and  soon took  control, attacking anyone in their way. Officers retreated to safety.

The Administration block was set on fire and irreplaceable prison records lost. Police and soldiers rushed to Dartmoor.
The trouble was quickly quelled and the ringleaders later tried and convicted. Ropes, grapnels etc. found afterwards, confirmed suspicions the riot was a cover for an (unsuccessful) escape plan.
Dartmoor today

The bad old days are gone. Dartmoor now holds low category prisoners who are encouraged to undertake training programmes to help them on their release. Skilled advisors hold discussion sessions to make them aware of how unacceptable their crimes are. Single cell accommodation still applies and they eat in their cells. Showers and telephone communication with their families are freely available. They are not here to be punished; their punishment is loss of liberty tempered by help towards reform and rehabilitation. 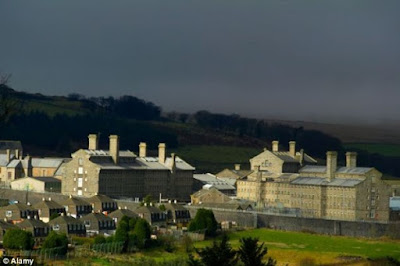 24th July 2020
We make it to Princetown as a low mist settles and head for the Plume of Feathers, a park4night spot that had good reviews. We were glad to find it , especially as there seemed to be no campsites around and wild camping would have been difficult in the national park. OK though if you have a small tent. We park round  the back of the pub where we see that there are campers already and a lot of space . The only downside was the whole area appeared to be on a hill, a slight one, but an incline nevertheless.
Finding our way into the bar area, and being asked to use hand gel ( Covid times), we pay the lovely chap, who was wearing a facemask, £18 for two nights. 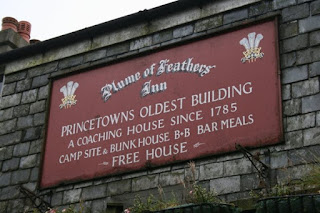 That’ll be long enough to see the area and if we like it we’ll stay for longer.
After booking, we’re sent away with a menu for the restaurant. Of, course, Peter would like to try it, while I try to justify the spend in my head.
Later we find the delightfully decorated showers rooms and the outside washing up area. I know, a bit of a dichotomy there. It’ll do just fine, I think.
After a detailed search we find a good enough / level enough place to park up and sitting in the camper with a cup of coffee, looking out at the misty drizzle (or mizzle as the Cornish call it), I take a look at the menu. There are some gorgeous dished to choose from , but not many that are gluten and dairy free. But I work out that some of the recipes could  possibly be tweaked if the chef was willing. 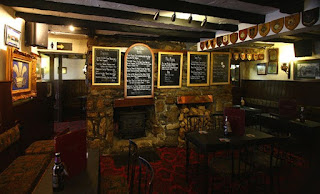 We are shown to a table by the fire, for which I’m mighty grateful, the weather having turned a bit chilly. I love this menu, you can have a regular or a small on all their meals. We choose the same – chargrilled chicken with bacon, cheese , chips and salad. Of course Peter has no cheese. They gave him something else, but I can’t remember what. My small meal cost £7.95 and his regular cost £11.95. The difference? Not a lot, not £4 worth, that’s for sure.
With two pints of Guinness the whole meal came to £29 – not bad for a fine evening dining, with lots of banter from the table opposite and the cockney waiter and  with the added attraction of a spoiled dog who was allowed to lick the table!
And to bed, with the hope of some sun tomorrow.
But no such luck, the drizzle continued . However,  we manage buy an ordinance survey map which gives us the courage to go for a walk out on the moors. We choose a route and after having coffee we set off. The moors look vast in front of us but we’re on a path, so it’s ok right? We’ll we hope so.
We meet some animals along the way – ponies and cows, mostly. Their freedom inspires me. 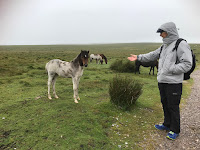 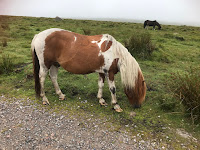 And the road seems long, a trek. 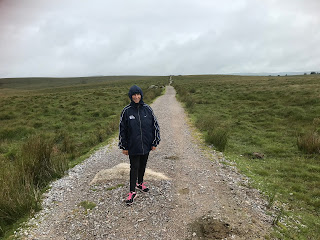 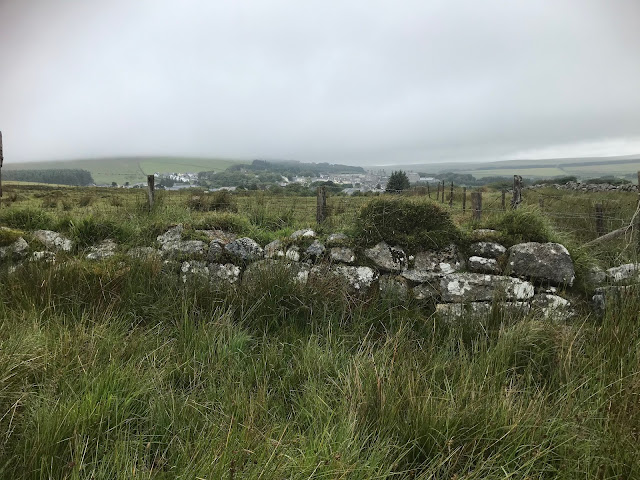 Looking back we can see the town with the tell tale walls of the prison nestled in there too.
This next picture probably shows it better. 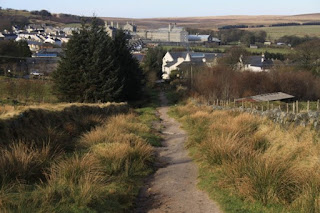 Over four hours later and having walked for more than nine miles and having got lost on the moor in the mist, we walk back into the campsite, tired , wet and relieved. We enjoy a bean chilli that I had prepared a few days previously. How welcome that meal was after our long, wet trek through the moors.